Afghans and the Spirit of 1776

In this arresting photo, Afghan poll workers shuttle portable voting stations, ballets and ballet boxes into remote northern villages in Afghanistan using donkeys to hike over washed out roads and rickety bridges. Over 800 donkeys are being employed to get ballets in and out of some of the most rugged terrain on the planet. Today all over the country Afghans are risking life and limb to take pencil in hand and voice their choice for president. Threats from militants are non-stop and some Afghans will undoubtedly be injured and even die trying to do this simple civic duty. 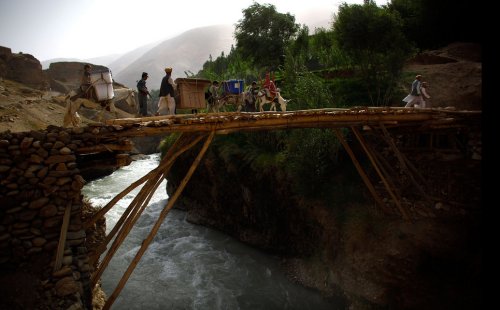 Like many Americans on election day in November of 2008 I went to the polls and dutifully filled out my ballet. I do not remember considering the possibility of violence. Indeed, although there are passionate Democrats and Republicans in my state, I don't remember even thinking that there might be an unpleasant verbal confrontation. The Afghan people, with their determination to make democracy work, are risking more today than I as a white American male will probably every risk in my own little corner of the world. Of course I am not decrying the lack of violence on our own election day. I'm only saying that I risk very little, and perhaps I am poorer for it.

I'm reminded of the words of Jefferson in 1797 that the "...the tree of liberty must be refreshed from time to time with the blood of patriots and tyrants". I've always hated this quote. It seems so cavalier and bloodthirsty (especially in light of the French Revolution just around the corner). But then Jefferson and the class of 1776 knew about risk and sacrifice. They risked their lives to create the foundations on which I can safely dismiss his remark without fear of reprisal. Indeed, one wonders if Jefferson, Hamilton, Adams and Washington would have more in common with the Afghans than with the average American citizen. Jefferson's point was that liberty requires sacrifice and vigilance - qualities that we have perhaps lost as our affluence has increased.

So here's my prayer for the Afghan people. May they succeed in their quest to rise above oppression. May their election be free from violence, and if not, may God continue to grant them the courage to stand firm. May the transition of the reigns of power be peaceful and gentle. We are all watching their example with hopeful interest as our passion for liberty is renewed by their determined pursuit of its fruit.

The Journey: Phase II - The Clone Wars
Best Halloween Celebrity Costumes said: A Halloween occasion is only a normal yearly occasion for a considerable lot of us. However, for a f... [More]